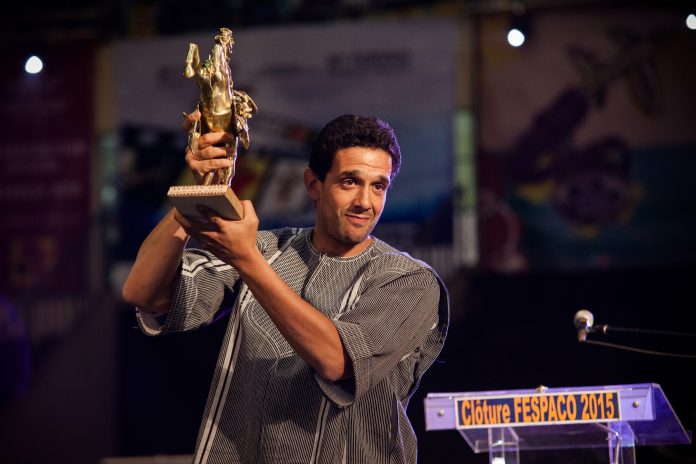 Fievres by Moroccan filmmaker Hicham Ayouch won the Gold Stallion this saturday at the 2015 FESPACO, the most prestigious award given out this competition. A crowd favorite, Timbuktu won awards in minor categories such Best Decor and Best Music.

“I am an African and I am proud of it.”said Ayouch, “We are part of a beautiful continent, noble and rich, we are the mother of all earth, we are the wise men of the world.”

“Fievres” is the story of Benjamin, a thirteen year old boy who is sent to live with his father after his mother is incarcerated. The father who still resides at home with his parents, finds himself completely destabilized by the new arrival in his life.

The closing ceremony took place at the Palais des Sports located in the chic neighborhood of Ouaga 2000 in the Burkinabe capital of Ouagadougou, with transition President Michel Kafando present for the festivities.

In second place, Fadhma N’Soumer by Belkacem Hadjadj from Algeria and third place was given to Burkinabe filmmaker Sekou Toure for his film L’Oeil du Cyclone. The star of the film Assande Fargas also won in the Best Actor Category for his role in the film. Other winners include Ivory Coast’s Marie Christina Amon with the television series “African Chronicles”.

This Fespaco is the biggest festival on the African continent. Every two years, the city of Ouagadougou crowds up with celebrities, film professionals and cinephiles from across the globe, making it a top destination during this period. About thirty countries participated in this year’s conquest for Africa’s most recognized award : the Golden Stallion of Yennega.

The next edition of the Fespaco will take place from February 25 to March 4 2017.

The 25th edition of the FESPACO ends this weekend. The closing ceremony will take place this saturday march 7 at the Palais des Sports located in the chic neighbordhood of Ouaga 2000 in the Burkinabe capital of Ouagadougou.

About thirty countries participated in the conquest for Africa’s most recognized award : the Stallion of Yennega. Out of 19 nominees competing in the Best Picture category, only one will make the cut. Audience favorite Timbuktu is a sure win for this prize. The choice is now in the hands of eight festival jury members. That’s the beauty of awards season, anything can happen. This could be a second award for Mauritanian filmmaker Abderrahmane Sissako after winning in 2003 for Heremakono (Waiting for Happiness). Tonight’s winner will also take home a cash prize of 20 million CFA, about 30 000 dollars.

Feature films not only compete for the Stallion of Yennega award, there are about fifteen other categories to win from including Best Music, Best Scenario, Best Poster, the Oumarou Ganda First-Film Award, Best Editing, Best Actress to name a few.

Let’s break down one of the tightest races in years at the FESPACO. Here’s our best stab on how things might unfold during the award ceremony, with predictions on these top three categories.