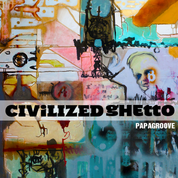 The 12 musicians of PAPAGROOVE are deep-rooted in solid afrobeat; moulded like the cream of 70’s funk bands, the crew combine 5 brass instruments with 2 guitars, 2 keyboards, drums, many percussionists, bass and vocals. Civilized Ghetto, their 2nd album, is the artistic result of the band’s common creativity, audacity and musical dexterity. Recorded at La Central Studio, produced by Maxime Audet-Halde (nominated at the 2012 Juno Awards in World album of the year) and co-produced by Jean-François Ouelettte, Civilized Ghetto builds on the passion of their first album, We’re Not Blind. The songs of Civilized Ghetto are sung by singer Sébastien Francisque, who delivers them with his soul-funk voice mixed to genuine and catchy songs.