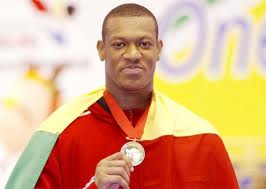 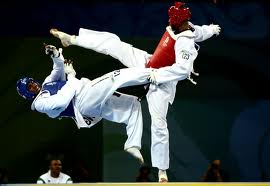 There are many fighting sports, how do you begin in taekwondo and what does it bring to you?

When I was young I played soccer on the street every day like most African children, however it was only when school was not in session. During school I didn’t have much time to play soccer, so I had to find another sport to participate in after school. My father’s younger brother was serious about Taekwondo and he suggested that I take Taekwondo. He told my father that I would learn self-defense and Taekwondo was so much more than fighting: Tae means “kicking”, Kwon means “punching” and “Do is “the way of life.” It is the “Do” component of Taekwondo that makes this martial art so powerful for young people.

Living by the tenets of Taekwondo (courtesy, integrity, perseverance, self-control and indomitable spirit) are what make a young person become a strong leader and role model. So my father brought my brothers and sisters and me to the dojang to enroll us; that was how I got started on the best journey of my life. Without Taekwondo I would not have become the man that I am. Besides the wisdom I get from my parents, the knowledge I receive from Taekwondo has been the single most important component in my overall development as a human being. I would even go so far as to say that Taekwondo saved my life.

How do you prepare yourself before a competition? What is your regimen?

Like most elite athletes I have to train three times a day to prepare for international competition. My coaches, Fernando Georges Ramos and Patrice Remarck, mandate a strict regimen that includes cross training with weights, running for cardio, sprints for speed, bag and hogu drills for stamina, and plyometrics for explosion….And lots of stretching! My Coaches have designed a cutting edge training system that enhances athleticism and agility while developing world-class technique so I feel very fortunate to have them.

I’m a heavyweight, which is the last division (over 87 kg) and I’m a big eater. In other words, I eat pretty much everything [laughs], but seriously, getting close to competition, I watch a little bit my regimen cause, it’s not good to be too heavy in Taekwondo because then you sacrifice speed and that makes you slow which is bad. I weigh 105 kilos and I’m fast enough for my division.

Concerning the Taekwondo in Mali, how developed is it? What could you do to influence the situation as a two time World Champion? 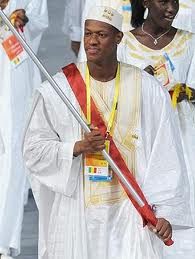 Taekwondo is not well developed in Mali compared to Korea, Iran, Spain, the United States, and Mexico… But because I’m a two-time World Champion, people in my country have become more and more drawn to martial arts and they’re sticking with it. It’s exciting for me to watch because so many young people now want to have the chance to be like me or even be better than me, which is GREAT.

It’s humbling and reminds me always that the kids watch what I do and they may try to emulate me, so I have to be responsible as to not lead them down the wrong path. As a World Champion, I’m bringing an entire nation of people to Taekwondo, giving much the hope that they too can accomplish what I have accomplished. Today Taekwondo ranks third in my country in popularity, just behind soccer and basketball…and I’m extremely proud of that.

After 2009, you did not compete during several months, how difficult was it to be back on action?

It’s always difficult for an athlete to be forced to take time off; in fact it is heartbreaking, especially when it’s due to injury because you feel so vulnerable and weak. It’s like your whole world has collapsed and you’re just trying to build it up again, but there are so many factors that are out of your control. Also, you lose flexibility, muscle memory, strength, and endurance so it can make coming back exceptionally difficult.

My knee was severely injured while fighting for the second world title in 2009 and playing also basketball. Afterward, I had surgery but then lost all the strength in my leg so I had to completely rebuild my leg; kind of like when a baby starts walking for the first time. This added psychological strain because then I had an overriding fear that my body would never get back to the level it was before the surgery. But through faith in God and working hard, I’ve learned to manage the pain and work toward being my best again. When you set a goal firmly in your mind, your potential becomes unlimited and you do whatever it takes to make it happen.

Talk us about your foundation?

Well, it’s not quite a Foundation yet but it is an Association under my name, ADMK (Association Daba Modibo Keita). I created it in October 2008 with the support of my family, particularly my older brother Alou Keita, along with some close friends and the goodwill of many people. Our mission is to help youth accomplish goals through sport using their individual talents to be afforded a similar opportunity like the one I had.

You know, Mali is a little poor country in Africa and so many children have talents but they don’t have that opportunity to be in better condition to rise up… I had that chance, cause the International Olympic Committee IOC, gave me a scholarship in order to be in condition to do my sport and that’s why I’m two time world champion today, I’m thanking the IOC for that and I’m encouraging them to do more, cause it’s very helpful for us, African athletes coming from those similar countries…

It’s not just about Taekwondo. The Association Daba Modibo Keita believes that all sports can provide a positive outlet for young people to excel. We do have a soccer center with talented young players participating in the Mali National Championships, and also a basketball team, Art Troupe and off course a Taekwondo team as well doing amazing things. Association Daba Modibo Keita is working to help young talents rise up as stars. I spend time organizing events and supporting multiple venues because it’s my duty…A way for me to give back and help build community, which in turn over time could help, rebuild an entire nation.

What is your message for the Afrokanlife readers?

A big thanks to Afrokanlife for giving me this opportunity! I encourage every Afrokanlife reader to continue supporting Afrokanlife. Through an ever-evolving collaboration, we can get to know each other and make Africa and the world a better place. Together we can plant seeds, one at a time.

I graciously ask every reader to pray for my country, Mali, and other African nations suffering civil unrest. May these nations rise above the violence and learn to eradicate power struggles. May Africa one day lead the globe in human rights and compassion for every citizen, regardless of tribe or ethnic affiliation.

I am also preparing for the 2012 Olympic Games in London, so I would be most grateful if Afrokanlife readers would pray for me to represent Mali and all of Africa, with honor and dignity. I want to thank my family for their support, my Dad Mamadou Keita and my Mom Alimatou Tounkara, Brothers and Sisters, my beautiful country Mali, the IOC, my coaches, my friends, my teammates and all the people that have helped me become who I am today.

Thank you Afrokanlife and God bless you all.