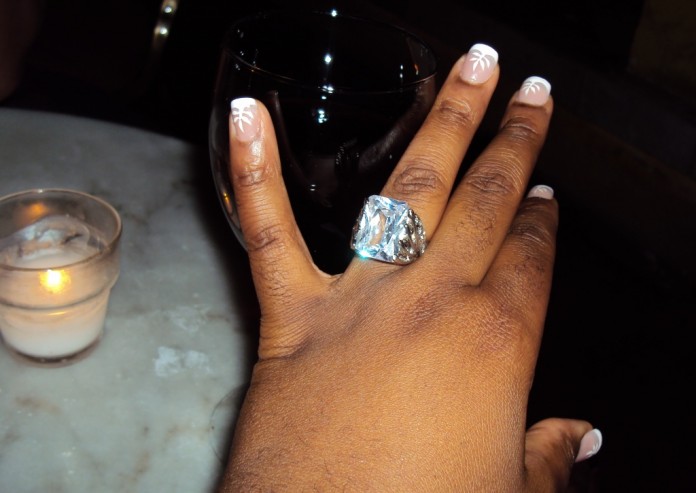 Men in my life: The Proposal by Nina Mayers

Lets get married!! I love that song by Jagged Edged… Can I say now they are THE best (ok one of THE) R&B groups of ALL time. Period. But that’s besides the point. Most girls have had a marriage proposal in their lifetime; be it a serious one, or a half ass couple of words strung together. Some men actually think that selling the illusion of marriage might get them into bed a lot faster…granted its often worked, but it still fascinates me. It is amazing how “easy” it has gotten to convince girls of “long term” relationships, I guess its because most live in the HOPE of forever (but again, I digress).

The men in my life, are wonderful, I think I have told you this before. They are specimens to be studied. As usual I have lived various experiences with these men and a few of them in my life have made me promises of love and long term commitment (which they couldn’t hold) but there have been some memorable proposals…

Take Simon for example: we dated officially 4 months. With its ups and downs, I was learning to discover a man I couldn’t see myself with and he was learning to love his ideal woman (or so he said). His quirks and faults were suddenly annoying and we were getting past the honeymoon phase, I usually got past it quite quicker than most, because I like to live in reality. And then in the 5th month, we separated physically, quite the distance. I knew that to hold on to our relationship we had to communicate but I also knew that down the line he would disappoint, but I still held on for dear life. Hoping against all odds he would be different. I have to say, I was naive back then. He turned out to be one and the same. His communication skills were less than lacking. I moved on and put him way behind me. I thought I would keep him as a “friend”. Six years down the line, he tells me whenever he gets the chance, “Mayers…I have never known another woman like you since we separated. You are the one for me I want to marry you”. And I always respond, “but we are no longer compatible, I have grown, I have moved on and I don’t see myself coming back”….he refuses to accept that I am not the same girl he knew at 20. I think he thinks that we can just jump start were we left off. That the memories and the hurt have been diluted with time – what he has forgotten or refuses to accept is that , I may forgive, but I don’t forget!

In the middle of a cold November winter, laying on the couch one Saturday evening; too tired to cook, too moody to go out, Mike ordered us some Chinese. He brought home some hagen daaz mango sorbet (my favourite), and rented some movies at the local blockbuster. I insisted that he needed to watch Love Jones (to me it was blasphemy that he had never watched the misadventures of Darius & Nina. Nota Bene: IF YOU ARE READING THIS & HAVEN’T WATCHED IT YET…then please do YOURSELF A FAVOR & WATCH IT NOW) … Back to my story; so we were basking in the authentic love & poetry of the movie (I had no ulterior motives beliedat ), when Mike turned me around, kissed me and said “I could spend the rest of my life with you Mayers; you know that right?” …. I kissed him back and turned back to my movie; I figured he was high from all the jones loving. We never talked about it again, until last year, when he called to check up on me (the comebacks :P) We went through the niceties and he told me he was getting married next year. I congratulated him. But I was kind of uneasy, he then ventured into a topic I had hoped we would never brush…. He reminded me of that cold November night— he told me that my “unresponsive” reaction had discouraged him, that he had hoped I would be more excited, that I would have expressed the desire to be with him forever…. I simply said: “had you been serious, you would have brought it up again , instead of throwing it back in my face now a few months away from your wedding.” I heard a click. Hanging up was his “adult” response to most problems.

The one I enjoy the most is Danny. See he has never proposed but whenever he talks to me, he tells me how he expects our home to be and how kids to be brought up. I play along because, well.. Its fun.
Tell me what are your memorable proposals?
I Do. Do you?