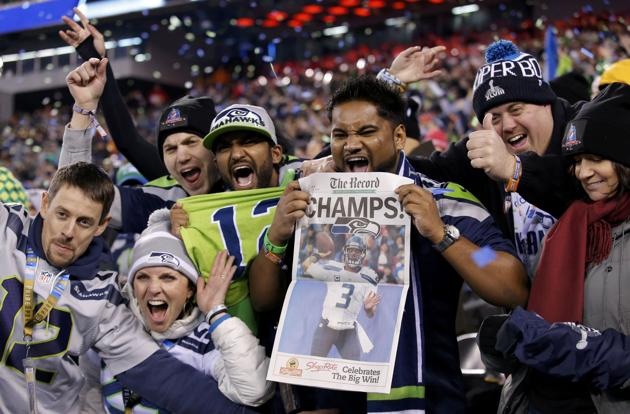 The top-ranked Seattle defense shut down the top-rated offense of the Broncos and record-setting quarterback Peyton Manning, creating four turnovers and turning what was expected to be a nail biter into a Super Bowl 48 rout.

Five previous times the NFL’s top-rated defense had faced the league’s number one offense, and the defenders were 4-1 in those encounters.

Seattle, and their “Legion of Boom” defensive secondary, fast-covering linebackers and determined pass rushers, upheld the tradition on an unseasonably mild night in the first outdoor venue in a winter-weather site.

“This is an amazing team,” said Seahawks coach Pete Carroll at the Lombardi Trophy presentation to the champions on the MetLife Stadium field. “These guys would not take anything but winning this ball game.”

Seattle turned two interceptions into second-quarter touchdowns for a 22-0 lead at intermission, the second coming on a 69-yard interception return by linebacker Malcolm Smith, who received the Most Valuable Player award.

Defensive end Cliff Avril jarred Manning as he was throwing on the play and Smith corralled the floating pass in the middle of the field and took off for the end zone.

“Man, it’s incredible,” said Smith. “It’s the way our defense is set up. We just run to the ball. I’m just the one today. It happens all the time like this. It feels great.”

The Seahawks, who led the NFL in creating turnovers, also recovered two fumbles in the lopsided contest that gave them their first Super Bowl crown in their 37 seasons.

The comprehensive victory began 12 seconds into the contest with a two-point safety on a bad snap over Manning’s head into the end zone on Denver’s first play for the quickest Super Bowl tally ever.

After Denver’s second half kickoff, Percy Harvin also took 12 seconds to score, racing 87 yards into the end zone to confirm the romp was on in taking Seattle’s lead to 29-0.

Second-year quarterback Russell Wilson, leading the second youngest team ever to play in a Super Bowl, took the spotlight from five-time NFL Most Valuable Player Manning by completing 18 of 25 passes for 206 yards, two touchdowns and no interceptions.

“We believed that we could get here,” said Wilson. “At the beginning of the season I told our guys, ‘Hey, why not us?’

“We had the talent. We had the coaching. We have the best fans in the National Football League. We wanted to win it all.”

Manning, who set NFL records for most touchdown passes and yards passing in a single season, was throttled in the first quarter as Seattle put their stamp on the game by playing Denver receivers tight and registering crunching hits when they did catch the ball.

“We knew they were fast. It was still a matter of us doing our jobs better and we didn’t do that tonight,” said Manning, who failed in his attempt to win a second Super Bowl ring and who fell to 11-12 in his career postseason record.

“I think we played a great football team. We needed to play really well in order to win and we didn’t come anywhere close to that.”

Seattle outgained Denver 148 yards to 11 in the first quarter but only led 8-0. When they stepped up their pass-rushing pressure on Manning, the Seahawks harassed him into the interceptions that helped them break the game open.

With the Broncos desperately far behind, Manning took to the air in a futile attempt to make it a contest, and in the end set a Super Bowl record with 34 completions, while receiver Demaryius Thomas set a record for most receptions with 13.

“It was a combination of coverage and pressure as it always is in pass defense,” Denver coach John Fox said about the Broncos’ difficulty in getting their pass attack going.

“There is a reason why they were the number one team in defense during the season. Give them credit.”

Why I Hate School But Love Education ?