Today, I would like to speak about one of the best motivation’s video which exists on youtube: How bad do you want it ?

Obviously, there is not just one way to see ” the success ”, but if I particulary chose this one, it’s cause’ it responds in what people are looking for when they speaking about sucess. The moral of this video can be apply in every domain of your life, as well as in all you do. Futhermore, considering that youtube’s videos can be delete at any moment, I decided that was the good time to share it. You’ll find below, the retranscription of the text as it is explained in the video. The athlete of this video is Giavanni Ruffin. 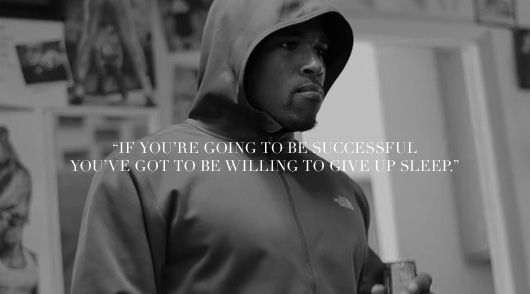 Edited Text, ‘How bad do you want it (Success)’:

There was a young man who wanted to make a lot of money, and so he went to a guru. He told the guru he wanted to reach his level of greatness. And so the guru said: “If you want to be on the same level I’m on, I’ll meet you tomorrow at the beach.”

So the young man arrived at 4:00 a.m. He had on a suit, but he should have worn shorts. The old man grabbed his hand and said: “How bad do you want to be successful?” The young responded: “Badly.”

So the old man told the young man to walk out into the water. It was waist deep. The young man thought: “This old man is crazy.”

Then the old man said: “Come out a little farther,” and the young man did so.

As the young man was up to his shoulders in water he again thought: “This old man is crazy! He’s making money, but he’s crazy.”

The old man said, “Come out a little farther.”

The young man obeyed, but wavered as if he might turn back.

So the old man said: “I thought you said you wanted to be successful?”

Listen to me. You’ve got to want to be successful so bad, you forget to eat.

Beyonce said one day she was on the set doing her thing and three days went by. She forgot that she didn’t eat because she was engaged.

I’ll never forget, when 50 Cent was doing his movie I did a little research on him and 50 said when he wasn’t doing the movie, he was doing the soundtrack. And they said: “When do you sleep, 50?”

He said: “Sleep? Sleep is for those people who are broke. I don’t sleep.” He said, “I have an opportunity to make a dream become a reality.”

I’m here to tell you today that you can come here, you can jump up, you can do flips, you can be excited when we give out money but listen to me: You will never be successful until I don’t have to give you a dime to do what you do. You won’t be successful until you say: “I don’t need that money because I got it in here.”